From the age of four, I have loved to draw. My artwork often elicited approval and encouragement from friends and family which gave me confidence and self esteem at an early age.

On a field trip to the Cleveland Museum of Art when I was ten years old, I became bored and disappointed by the abstract works of art. I wandered away from my herded classmates to explore the galleries in hopes of finding something interesting. As I descended a flight of steps and rounded a corner, I found myself alone and face-to-face with ‘Le Repos’, a large oil painting by William Adolphe Bouguereau. The illusion of natural realism so impressed me that I said to myself, “I want to paint like that!” The memory of that experience has inspired me and remained a driving force in my work.

As a portrait artist, I work from life in the studio which has taught me the importance of first-hand observation. Painting “all’aperto” (Italy’s term for in the open air) broadens and enhances the studio experience, and my paintings benefit from the melding of the two.  This experience also helps when it becomes necessary to work from photographic reference.

I believe that natural realism has a powerful effect on people. I create artwork that honestly describes a subject’s visible texture, and in so doing, honestly describes its hidden texture — its spirit. Notwithstanding this statement, it’s important that my artwork speaks for itself — to communicate in a language so universal as to be understood by anyone throughout the world. 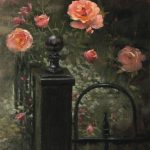 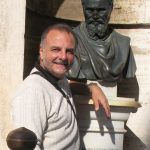