Katherine Galbraith is a nationally recognized artist who has received numerous awards and recognition throughout her career. Her sales have been impressive, and her numerous collectors follow her career with enthusiasm. She has exhibited throughout the United States, in galleries from New York to California. Her success as a portrait artist is evident as her clients return to have Katherine paint members of their families. Katherine’s clients include leaders of society, heads of corporations, religious institutions, hotels, writers, athletes, and presidents of colleges and other academic institutions.

A native of Memphis, TN, Katherine was blessed with parents who encouraged her artistic talent. As her talent blossomed, she began private studies in classical realism and portraiture. She received her first portrait commission at age 12 and has been painting portraits ever since. When she was 15, her family moved to Westchester County, NY. There she pursued art and portraiture through high school and college, receiving the Fine Arts Award from Bronxville High School, and the Outstanding Achievement in Art Award from Bradford College. After college Katherine decided to pursue art as a profession. She attended the National Academy Museum School of Fine Art on a full merit scholarship where she studied portraiture under Daniel Greene, NA and Impressionism under Robert Phillip, NA. More recently she has studied under Michelle Dunaway and enjoys utilizing the Copyist Program at the National Gallery of Art in Washington, DC to hone her skills.

Katherine began her professional career, first in New York and then in Boston, where she was represented by Fine Art Unlimited in Chestnut Hill, MA. She then moved to Atlanta, GA, where she continued to paint portraits exclusively, first being represented by The Picture House Gallery and later by Artist Representative, Anne Irwin. Anne convinced Katherine that she should branch out into other areas besides portraiture. Katherine began painting still life, seascapes, landscapes, various animals, both winged and four-footed, and commissioned pieces which were received with enthusiasm by her collectors. Over the next several years Katherine began exhibiting in galleries in St. Simon’s Island, GA, Boston, MA, Washington, DC, Raleigh, NC, Dayton, OH, Boca Raton, FL, and Carmel, CA.

Katherine’s major one-woman shows include events in Westfield, NY, Bronxville, NY; Raleigh, NC; Atlanta, GA; Boston, MA; St. Simons Island, GA; Sea Island, GA; Macon, GA, and Pittsburgh, PA. Her work is often juried into national shows; her favorite organizations in which to exhibit are Oil Painters of America, the Portrait Society of America, and American Women Artists. Katherine’s work has been featured in national magazines and newspapers including Fine Art Connoisseur Magazine, Fine Art Today, International Artist, Art of the Portrait, Outdoor Painter, Veranda, Better Homes and Gardens, Southern Living, Where: Boston, and has often appeared in Coastal Living and Coastal Illustrated. Her work was favorably compared to John Singer Sargent’s in a review of her one woman show in Raleigh, NC. In May, 2013 Katherine and her husband purchased the restored New York Central Passenger Depot in Westfield, NY, where she operates The Station Art Gallery & Studio of Katherine Galbraith. Here she hosts Plein Air Westfield and teaches workshops as well as displaying her work in a unique environment.

In 2015 Katherine received and accepted an invitation to serve on the board of Visual Arts at the Chautauqua Institution, a steering committee for the arts in the Chautauqua community.

Katherine’s work has appeared in:

“It is important that the artist should regard every new painting as an entirely special world of color, light, form, and line.” Nicolai Fechin 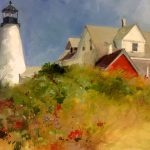 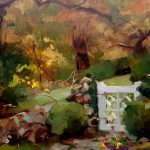 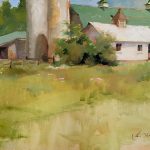 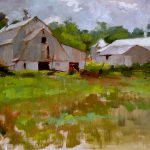 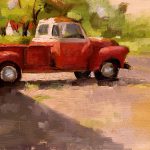